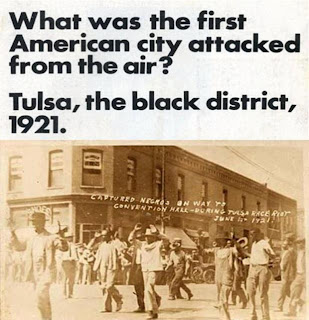 What was the first US city to undergo an attack from the air?

No, it occurred during what was probably the worst, bloodiest, deadliest and most destructive "race" riot in American history occurred in 1921: in the "Black" neighborhood of Tulsa, Oklahoma, called Greenwood. The Governor of Oklahoma ordered military aircraft to attack the Greenwood district of Tulsa with incendiary bombs and sniper fire on Sunday, June 1, 1921, to suppress a "Negro Rebellion."

I taught in Oklahoma in the mid-90s, and learned of it while I was living there. Very few people, either INSIDE or OUTSIDE the Sooner State were conscious of it then---or STILL, I suspect. I was reminded of it when, by a twist of coincidence, this poster was floating around on Facebook the other day.

The "Greenwood District" of Tulsa, Oklahoma, was the home of  THE most prosperous community of Black Americans anywhere in the country, then or possibly EVER. It was affluent, with nice homes, prosperous businesses, growing families, and good prospects.. It was known as "the Black Wall Street."

It was totally obliterated--razed to the ground--in just about 16 hours, between the afternoon of May 31, 1921, and noon the next day, June 1st, by white rioters who, with the support and material assistance of the Oklahoma State government, proclaimed they were suppressing a "Black Rebellion" which stemmed from black residents reactions to a lynching. Driven by careless, hate-filled, racist editorials in the city's white press, thousands of whites marauded all over Greenwood, killing, burning and raping black citizens across a 50-block, urban area. On Sunday morning, at the height of the violence, the Governor sent military aircraft over the district, and the planes dropped incendiary bombs, and snipers fired on residents below..

An estimated 5-10,000 white Tulsans rioted, on (as usual) flimsy pretexts--mainly, that a black "boy" had assaulted a white damsel in an elevator ion an office building. Whites lynched the alleged offender, and when the black community objected, forcefully, the mob then turned on the envied, successful black people. In less than a day, the Greenwood district of Tulsa, the wealthiest black American community in the whole country, simply ceased to exist.

The era immediately after the end of WW I was one fraught with racial conflagrations, in the South (Longview, TX), the North (Chicago, Duluth, MN,  and Omaha, 1919) as well as in the border states such as Oklahoma. Anti-black, racial violence was not an unusual problem; it was, indeed, commonplace at the time..

What made Greenwood "worse" than many was that the Black people resisted; hence the extent of the damage, death and destruction probably were amplified.

There were a pretty fair number of WW I veterans among the population, and when the calls for lynchings started, these men armed themselves and put on their old uniforms and stood up...

Which further enraged and infuriated the already rabid white rabble-rousers.

Along with killings, beatings and other brutalities, thousands of innocent blacks--American citizens, just to refresh the memory--were rounded up and warehoused for DAYS in filthy, toxic, primitive conditions.. Nobody has anything like an accurate count of the blacks killed. There is a lingering rumor of a mass grave in the vicinity. Locals estimated as many as 300 black Tulsans were murdered by the mobs. The Army had bodies hauled away in freight cars, according to contemporary sources. The "official" death toll is 36: 26 blacks and 10 whites. The District, and Tulsa's black community, too, never fully recovered.

The event lay pretty much dormant in the memories of the majority population for almost 80 years, until near the end of the 20th Century, America's most eminent black historian, John Hope Franklin--whose family had been made homeless by those riots, began to agitate for justice. A Commission was established in 2000, which returned its findings, along with recommendations for reparations.

The report recommended actions for substantial restitution; in order of priority:
The Tulsa Reparations Coalition, sponsored by the Center for Racial Justice, Inc., was formed on April 7, 2001 to obtain restitution for the damages suffered by Tulsa's Black community, as recommended by the Oklahoma Commission. In June 2001, the Oklahoma state legislature passed the "1921 Tulsa Race Riot Reconciliation Act." While falling short of the Commission's recommendations (ZERO in reparations, i.e.), it provided for the following bandaids:
In 2010, and again in 2102, the John Hope Franklin Tulsa-Greenwood Race Riot Claims Accountability Act..." was introduced in the US Congress, but no legislative action has been taken, and the ghosts of Greenwood, who were unjustly vilified and blamed in the aftermath of riots of which they were the unquestionable victims--and their descendants, are still awaiting some semblance 'restorative' justice more than 90 years later.

I taught at a very large university in Oklahoma between 1994 and 2000. I was in teacher education. During that period, I met only ONE native Okie who admitted to having ANY knowledge of the events in Tulsa in 1921. He was a high school history teacher, he said his grand-father had been part of the riots, and he got a reprimand from his principal for trying to teach about it. The reprimand was for using "unauthorized curricular materials."

What we really have here is a "project" for Denzell Washiongton and/or  Morgan Freeman!
A blockbuster of historical significance and a love story--a kind of black, land-locked Titanic" with a social message: "Greenwood, under siege!" A sort of WW II Jewish ghetto resistance romance movie, drenched in anticipatory pathos, but not set in Warsaw or Prague.

Only reveal at the END, while the district burns, and the heroes perish, that it's Oklahoma, 1921 and the attackers are ALL "good, All-American, whites."

Bibliography: (Wikipedia has a dry, didactic account of the events which is all the more powerful for being monochromatically understated.)

They'd Do It For You!

Woody (Tokin Librul/Rogue Scholar/ Helluvafella!)
"He's an old blind bear....alone in the winter woods...with only the smell of his breath for comfort. Too mean to die, too lost to care. But show some caution....he's still the Bear."